As many as 10 million homes in the United States get their water from lead pipes that connect the main under the street to the house. We all know the implications of that after watching the crisis in Flint, Michigan, unfold during the past year.

The problem is, few water utilities in America can say with confidence where these lead service lines are located in their systems, and fewer still share such information with their customers.

Not so with DC Water, a company serving more than 672,000 residents, along with businesses and government agencies, throughout the District of Columbia.

The utility unveiled an interactive map in June 2016 that quickly become the talk of the town. And that’s exactly what DC Water wants.

The idea was to engage local water customers to become proactive when information about their water pipes just doesn’t exist.

Like in communities throughout the nation, service lines in Washington are typically split between a public side that runs from the main in the street to the property line, and a private side that stretches from the sidewalk water meter into the house or commercial building.

As a result, DC Water, like most utilities, has more information on the public portion of the service line.

This is where citizens come in.

The utility invites customers to take a photo of the pipe where it enters their house and e-mail it in so records can be updated. More than 200 D.C. residents have responded thus far. 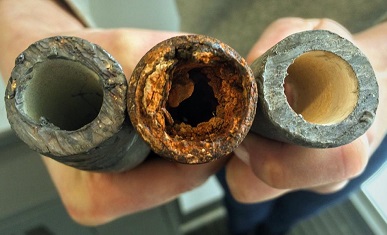 From left to right: A lead pipe, a corroded steel pipe, and a lead pipe with protective coating. Source: EPA

DC Water also offers a free test, available to all its customers, to assess whether there may, in fact, be a lead service line connected to their home and to determine if there’s lead in the water they drink. Since the map launched, nearly 1,100 requests for water test kits have come in – a definite increase, the utility reports.

We think this program can serve as a model for other communities with older homes that are grappling with lead issues.

Want to learn more about how the interactive map works, and why the government says such transparency is critical?

Our EDF Health blog has the details.

Why replacing lead pipes should be a national priority

An interactive map shows if homes in Washington have lead water pipes (dark spot), if they're lead free (green), and if no information exists (blank.)
DC Water