Skip to main content
Unlock your $1-for-$1 match. Donate now

Is Alaska, another oil state, the next frontier for climate action?

By Kate ZerrennerFollow
Kate is a Senior Manager for EDF's energy-water initiatives
Published June 28, 2016 in Climate

On a recent flight to Anchorage, Alaska, a man in the seat next to mine mentioned that the city only had two “bad” days of winter this year. Temperatures had hit a remarkable 70 degrees in March.

That was just the start. The following day, a boat captain noted that red salmon had arrived three weeks earlier than normal. And over the course of my trip, several people told me things like, “The last few winters have been the warmest I can remember.”

It struck me how similar these conversations were to those I’ve had with people in my home state of Texas. Except at home they speak of severe drought, hotter summers and extreme floods that seem to be occurring more often.

And just like in Texas, climate change is hitting vulnerable populations in Alaska harder than most.

The “melting glacier tour” no joke

I saw the most dramatic physical evidence of climate impacts on my Kenai Peninsula boat trip when we passed by Bear Glacier. This glacier marks the start of Kenai Fjords National Park, and it’s the largest glacier in the park at 13 miles long.

Before I left for Alaska, I had jokingly referred to it as the “melting glacier tour.” But it wasn’t so funny when I saw the evidence: This magnificent natural formation is receding rapidly.

With increasing average annual temperatures between the 1950s and 1990s, Bear Glacier retreated about one mile, creating a lagoon. Then, between 2000 and 2007, it retreated an additional two miles, releasing floating icebergs into the lagoon.

Making matters worse, in 2014, an outburst flood made the lagoon overflow into nearby Resurrection Bay. All this is having a direct impact on people living in Alaska.

The state is likely to see the first American climate refugees.

The 400-person town of Kivalina, home to the Inupiat people, and neighboring Newtok, where 350 Yupik residents live, must be moved as their homes and livelihoods will soon be under water.

As U.S. Secretary of Interior Sally Jewell noted, these towns are “washing away.” 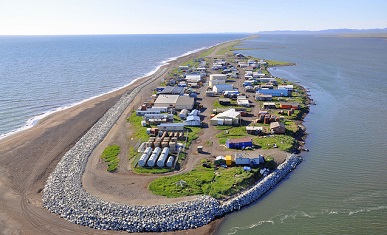 The barrier island town of Kivalina is sinking into the ocean. Photo: ShoreZone

The cost of the relocation could be as high as $200 million per town, and expenses could rise in coming years with 29 other towns in imminent danger. The cultural and social cost to the families that must be uprooted from their homes is immeasurable.

How is the state dealing with this remarkable challenge? The oil part of the equation makes dealing with climate change-related weather impacts even thornier.

Alaska state budgets rely heavily on oil revenues, with all its ups and downs. In 2014, 90 percent of Alaska’s state budget came from the industry. The following year, it dropped to 75 percent – a huge loss resulting from the recent oil price tumble.

That means there’s less of a buffer to pay for things like the relocation of communities, or to offset revenue loss from fisheries and other industries affected by climate change.

The reality is, heavy reliance on oil is no longer sustainable from an economic or environmental perspective.

Fortunately, one of the hallmarks of frontier-spirited states such as Alaska is adaptability.

Embracing cleaner energy sources is one way the state is beginning to prepare for a more resilient future – and it can look to another oil state for inspiration and know-how.

So I was not surprised when I looked out the airplane window as we departed Anchorage and saw rows of wind turbines spinning against majestic, snow-covered mountains.

Alaska’s frontier, can-do attitude can help the state’s vulnerable populations and all Alaskans prepare for a safer, healthier future. Now’s the time to do so.

Can we save the monarch butterfly?

I just watched an episode of Rotten on the fish industry in New England. It was talking about how EDF imposed fish sharing and the privatization of the industry. It helped the fish but destroyed the small fisherman. How only large corporate companies could survive what EDF had started. I don’t want to see this come to Alaska. I know it is already implemented in the crabbing industry. I am going to research this more.

Did you know that in the 70’s scientist said we were entering a new ice age. 25 years later it was global warming. We can’t predict the weather in Anchorage a month from now but their are those who say 25 years from now this is what we “think” the climate will be like. You saw the windmills on Fire Island that you mentioned in your article. Did you know that they are not helping,  but hurting the local economy. This experiment has cost taxpayers a lot of money. Just because you see them working doesn’t mean they are helping the community. I do not want to see what has happened to the fish industry in New England happen in Alaska because of outsiders like you that don’t understand our state.

Have you ever worked on a fishing boat, ran a farm, hunted to provide for your family. What are you credentials to do what you do and how articles like the one you wrote can have an impact on the lives of people in Alaska. Climate does change, it always has and people all over the world have adapted for thousands of years.

Hello Veronica and thank you for sharing your thoughts. You said you wanted to research this some more… Here’s another view of the “Rotten” episode you may find interesting: http://blogs.edf.org/edfish/2018/01/10/rotten-gets-it-wrong-about-new-england-and-catch-shares/