By Ilissa OckoFollow
Ilissa is an EDF Climate Scientist.
Published September 30, 2015 in Climate

California is in a state of emergency and two counties north of San Francisco were just declared a major federal disaster area as the Golden State endures its worst wildfire season in decades.

More than 9 million acres have burned so far in Western United States in what could shape up to be an all-time record year for fires.

At the same time, the wildfire season is growing longer than it was a few decades back, by as much as seven weeks in some areas. Earlier snowmelt in the West is contributing to this trend.

So why is the fire season this year worse than usual? The answer can be summed up with two words: It’s hot and dry.

And today, California, our most populous state, is the epicenter of the severe heat and crippling drought that are fueling the wildfires – conditions scientists are increasingly linking to climate change.

How wildfires and climate change connect

Last year was the hottest on record in California and three other states, and this summer piled it on with more record heat. But it requires more than hot weather to ignite and sustain fires.

Four years of the most severe drought conditions in more than a millennium has left California parched and brittle – in a perfect condition for wildfires. 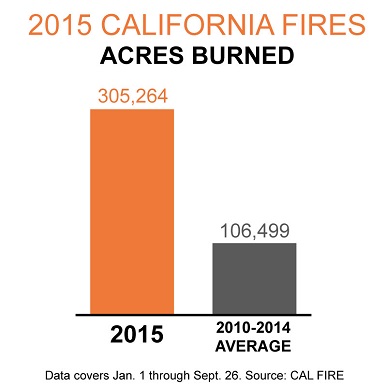 Warmer weather is evaporating more moisture from the ground, drying out the soil. At the same time, meteorological patterns are driving rain away from the region, a phenomenon scientists have linked to rising temperatures.

So while human activities are mainly responsible for starting the fires, human-made climate change is further contributing by making conditions ripe for fires to catch and spread. As drought and heat continue with rising greenhouse gas emissions, we expect more wildfires in years ahead - especially with the fire seasons getting longer.

But as humans, we also have the power to break the cycle and get the American West and the rest of the world on track toward a more sustainable future.

We can continue to spend an ever-rising amount of money to address devastating fires and other natural disasters made worse by our changing climate – or we can work together to slow and eventually halt emissions.

The charred land in California, Alaska and Pacific Northwest, the hundreds of lost homes and tragic fire deaths are a stark reminder that we have no more time to waste.

We must turn the corner on climate change, and soon.

Climate change is making conditions ripe for wildfires to catch and spread. We should love Mother Earth.