6 climate tipping points: How worried should we be?

By Ilissa OckoFollow
Ilissa is an EDF Climate Scientist.
Published May 28, 2015 in ClimateScience

One of the biggest fears about climate change is that it may be triggering events that would dramatically alter Earth as we know it.

Known to scientists as “tipping events,” they could contribute to mass extinction of species, dramatic sea level rise, extensive droughts and the transformation of forests into vast grasslands – among other upheavals our stressed world can ill afford.

The melting of the Arctic summer ice is considered to be the single greatest threat, and some scientists think we’ve already passed the tipping point.

As sea ice melts and the Arctic warms, dark ocean water is exposed that absorbs more sunlight, thus reinforcing the warming. The transition to an ice-free Arctic summer can occur rapidly – within decades – and this has geopolitical implications, in addition to a whole ecosystem being disrupted. 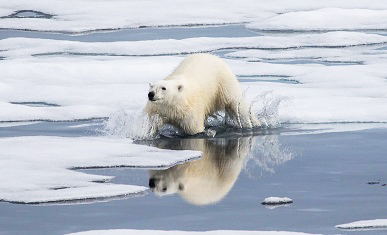 The warming of the Arctic may also render Greenland largely ice-free. While Greenland’s ice loss will likely reach the point of no return within this century, the full transition will take at least a few hundred years.

The impacts of the Greenland ice melt is expected to raise sea levels by up to 20 feet.

Half of the 10 largest cities in the world, including New York City, and one-third of the world’s 30 largest cities are already threatened by this sea level rise. Today, they are home to nearly 1.8 billion people.

Other vulnerable American cities include Miami, Norfolk and Boston. 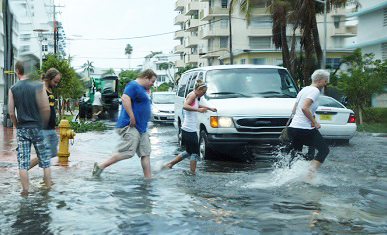 On the other side of Earth, the West Antarctic ice sheet is also disintegrating. Because the bottom of this glacier is grounded below sea level, it’s vulnerable to rapid break-up, thinning and retreat as warm ocean waters eat away at the ice.

Scientists expect the West Antarctic ice sheet to “tip” this century, and there is evidence that it already began happening in 2014.

However, the entire collapse of the glacier, which would raise sea level by 16 feet, could take a few hundred years. 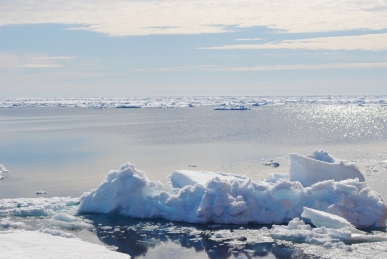 The oceans absorb about 90 percent of the extra heat that is being trapped in the Earth system by greenhouse gases. This could affect the ocean dynamics that control El Niño events.

While there are several theories about what could happen in the future, the most likely consequence of ocean heat uptake is that El Niño, a natural climate phenomenon, could become a more permanent part of our climate system.

That would cause extensive drought conditions in Southeast Asia and elsewhere, while some drought-prone areas such as California would get relief.

The transition is expected to be gradual and take around a century to occur – but it could also be triggered sooner. 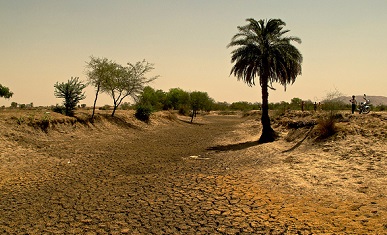 5. The Amazon rain forest dies back

Rainfall in the Amazon is threatened by deforestation, a longer dry season, and rising summer temperatures.

At least half of the Amazon rainforest could turn into savannah and grassland, which - once triggered - could happen over just a few decades. This would make it very difficult for the rainforest to reestablish itself and lead to a considerable loss in biodiversity.

However, the reduction of the Amazon ultimately depends on what happens with El Niño, along with future land-use changes from human activities. 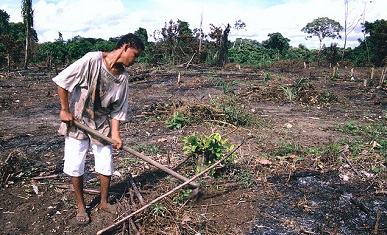 6. Boreal forests are cut in half

Increased water and heat stress are taking a toll on the large forests in Canada, Russia and other parts of the uppermost Northern Hemisphere. So are forest disease and fires.

This could lead to a 50-percent reduction of the boreal forests, and mean they may never be able to recover. Instead, the forest would gradually transition into open woodlands or grasslands over several decades.

This would have a huge impact on the world’s carbon balance because forests can absorb much more carbon than grasslands do. As the forest diminishes, the climate will be affected as will the Earth’s energy balance.

However, the complex interaction between tree physiology, permafrost and fires makes the situation tricky to understand. 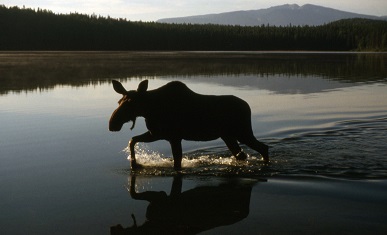 As if that’s not enough, there are a few other tipping events that scientists are also concerned about, but they are even more complex and harder to predict. Examples of such events include the greening of the Sahara and Sahel, the development of an Arctic ozone hole and a chaotic Indian summer monsoon.

How do we keep from tipping over?

We know from measurements that the Earth has had many climate-related tipping events throughout its history. Today’s situation is different, because humans are now driving these changes and the warming is occurring at a faster rate.

But as humans we also have the power to change the trajectory we’re on – possibly in a matter of a few years. We think we know how.

The world can turn the corner on climate change by 2020

I’m reading conflicting scenarios, some more palatable than other. Are there any actual, factual theories the majority of climate scientists agree on?

Theory can not be fact. Once its fact its no longer theory. We know what has happened before as factual but can't apply that to what could happen again as such, only theory.

In the scientific context, theories are supported by facts. https://en.wikipedia.org/wiki/Scientific_theory - a theory is where the body of facts points us.

In reply to Theory can not be fact. Once… by Paulo

The latest data and state of our climate written by NOAA, and 12 other U.S. federal agencies, published in November 2017: https://www.ncdc.noaa.gov/sotc/national/201711

Jesus spoke about the changes in the season vis a vis a fig tree. It’s happening now.

Hi Angela and thanks for your comment. Try this: https://climate.nasa.gov/scientific-consensus/

People are so brainwashed, just like [it was] back in the 70’s [when people claimed] how safe cigarettes were. It’s the same with climate change. And when it does happen, they are going to say, “What the hell is going on?”

Yep! You are so right! It's sad that people are so blind to the Truth!

I think it's just that human beings, like other animals, are hard-wired by evolution to be far more emotionally invested in immediate events/things/beings as opposed to more distant (in time or place) ones. Here's where imagination and planning come in. UNLIKE other animals, we are equipped with those. As a group, we just have to make a decision to follow those awarenesses rather than our emotions.

Without emotion, no motivation. We have to get our awareness up AND our emotions onboard in line with our awareness

In reply to I think it's just that human… by Teresa

1. The world is warming and has warmed, but the oceans , by absorbing both the heat and the CO2 have warmed faster. How much more heat they can absorb is a bit of an unknown but if we reach that point, watch out.
2. Local climates are changing, some more than others, eg rain in the Canadian Prairies in January 2018.
3. Try www.skepticalscience.org for info as John? Is a world renown climate scientist who started the site to give accurate info. So much fake news and science exists , it confounds the average person. Now denialists are publishing articles of doubt in pseudo scientific journals who will publish anything for the dollar.
4. I accessed this article vis Flipboard via picking news sites and topics through their topics suggested under : global warming; climate change ; clean energy; carbon dioxide etc. There seems to an incredible number of reliable sources and new in every day. Hard to keep up with.
5. Books from your local library: a. Michael Bloomberg, "How Cities can Save the World; b. Rising Tides by John Wennersten; c. Lester R. Brown: World on the Edge. Older but relevant. These are easy reads, not text booky.
6 . Just keep reading reliable sources and you will be amazed at the info out there

I am a firm believer. I knew the weather was changing decades ago; winters came later each year and left sooner. It’s a shame at how we are destroying our own planet for greed and leave a waste land behind.

I agree that we already have the tools to arrest climate change. One of the major tools given little media recognition is to make our new and also existing homes and buildings significantly more energy efficient up to the level of being Super Energy Efficient (SEE for short). In the U.S., 40% of our energy use goes into operating those structures and already proven methods and technologies could reduce that energy use by at least 75%. This translates into total U.S. energy use being reduced by 30%. While easy to begin, it will take a couple of decades to fully achieve. However, there are several other benefits beyond the obvious environmental ones.
See the web site << www.iseeb.us >> or get the book, “SEE” The EMPOWERING Energy Solution.

The other benefits of a program to convert our homes and buildings to the Super Energy Efficient performance level are: 1) many middleclass jobs will be created in the total construction industry, 2) when such an effort utilizes simple financing, the home & building owners will immediately realize lower cost of ownership (mortgage + energy costs), 3) the job creation and energy dollar savings will provide for stronger local & national economies, and 4) our homes and places of work will become more healthy and physically comfortable.

People live on this planet like there is no tomorrow. Soon, tomorrow will be here and there will be nothing left for tomorrow’s children. What a disgrace.

You forgot the biggest impact of all - the release of some or all of the 3 trillion tonnes of (mostly frozen) methane in the tundra, seabed and tropical peat deposits. If that starts to vent there will be nothing whatsoever that humans can do about it. It will drive the Earth’s temperature up at least 9-10 degrees, maybe a lot more. Such a planet will be uninhabitable by humans or larger animals. There is lots of science on this if you care to read it.

Julian Corely. You are absolutely right! And for those who do not believe that global warming is real or man-made, it's been debate, debate, debate, and debate some more. How much more science, and debate about the science do we need? There comes a point where debate becomes pointless except to obstruct.

The release of methane from frozen tundra and the oceans will accelerate global warming beyond current imagination. It will be like throwing gasoline on to an open flame. Yet we dither.

Quite frankly I am tired of all of the talk, talk, talk. It is beyond time for action and that action needs to occur immediately!

Human births minus deaths this year [alone] equals about 64 million. Humans have an unsustainable increase in population numbers. We need to at least talk about this and its impact on the planet. World Population Clock: 7.7 Billion People (2018) - Worldometers http://www.worldometers.info/world-population

Great writing. My book with Octogenarian Dr Orrin Pilkey and his son highlights your informative article and more Duke University Press Global Climate Change: A Primer. Email me if we can help!

I live in Alaska. When I was a kid, it would snow so much! Now we are lucky to have snow by Christmas. After the big earthquake, magnitude 7.0/7.2, hit Anchorage in November 2018, the snow we had was then lost by rain. This summer has been hotter and more humid than normal.

Seeing the change since I grew up is truly devastating. There are more fires and trouble with forest experiencing disease. I hope someone can save the world. I truly feel we have poisoned our world to the point of no return.

I am upset by all this talk about offsetting flights by paying for trees to be planted. It just lets people off the hook and salves their conscience. I think carbon offsetting is actually immoral!

Arctic sea ice is disappearing at a record pace.
NASA