5 years later: Revisiting the areas most affected by the BP oil spill

April 20 marks the five-year anniversary of the BP oil spill, and people around the country are reflecting on the state of the Gulf – how ecosystems and communities have recovered from the spill and how far they have yet to go.

I recently had the opportunity to spend time in coastal Louisiana, visiting some of the areas most affected by the oil spill. I was struck by how, within a 30-mile range from Belle Pass to Cat Bay, you could see so many points along the spectrum of ecosystem health – from near ecosystem collapse to successful barrier island restoration.

Amid the ongoing environmental and economic tragedy, I saw a successful model for recovery and restoration that can be adapted elsewhere in the Gulf – and perhaps beyond. One important missing piece is significant funding for restoration, which will only be available once BP accepts full responsibility for the damage it did to this precious region.

East Grand Terre Island, a barrier island between the Gulf of Mexico and Barataria Bay, some 45 miles south of New Orleans, has been in the news recently because of a massive 25,000-pound BP tar mat that was discovered on the beach and had to be removed.

The official cleanup had wrapped up a week before our visit, but even so, we found tar balls and other oily material along the beach, including this: 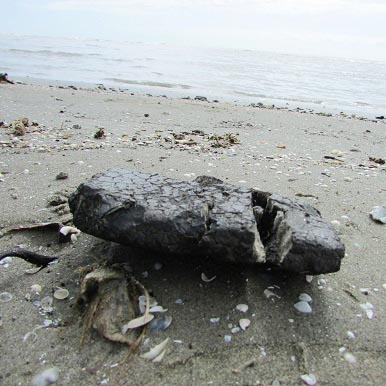 Nearly five years later, most but not all of the toxic elements in the oil still out in the Gulf have been broken down and dissipated. But this weathered oil still poses a potential risk to the health of both humans and wildlife.

As distressing as the re-oiling of coastal areas and continuing cleanup from the oil spill may be, even more disheartening is the fate of Cat Island.

Cat Island, also in Barataria Bay, was once a lush mangrove island that served as an important and thriving bird rookery. Before the oil spill, the island was teeming with pelicans, rosette spoonbills and least terns, just to name a few.

Now, all that remains of Cat Island are some dead mangrove stumps on a couple of shell mounds. Cat Island barely exists.

The thick crude oil that spewed into the Gulf during the spill coated the roots of the mangroves, cutting off their ability to take in oxygen. The mangrove trees suffocated and died, and Cat Island eroded away at an even more rapid pace.

But I also saw restoration success in progress.

Belle Pass to Caminada Pass Barrier Island Restoration is one of four large-scale barrier island headland restoration projects in Louisiana’s Coastal Master Plan. Once fully constructed, more than 2,000 acres will have been restored along the Caminada Headland, an area southwest of Barataria Bay.

Construction on the first phase of the beach and dune habitat restoration has been completed, and soon the entire project area will be planted with native vegetation. We saw birds and small crabs on the shoreline and small plants naturally re-vegetating the newly reconstructed habitat.

Not only is the early success of this project exciting, but the manner in which multiple funding streams have been leveraged to design and complete construction of Caminada’s beach and dune habitat is impressive. It shows preparedness and flexibility by both the implementing and funding organizations that could be modeled elsewhere.

An opportunity that can’t be missed

These days, a trip to Louisiana’s coast is almost always filled with mixed emotions for me. I feel excited and optimistic when I see the concrete steps toward recovery from the oil spill and restoring our coast, like at Caminada. I also feel great loss when I see pieces of the state vanishing.

And I have hope, because I know that the people of Louisiana will not let her go easily. The state invests hundreds of millions of dollars in coastal restoration every year, and the visibility and quality of these projects continues to grow.

Louisiana has cultivated a specific vision for coastal restoration and has spent the time and money to develop that vision into an actionable plan. One thing that stands in the way of these projects is BP’s public and ongoing refusal to acknowledge and accept full responsibility for the 2010 disaster.

Five years after the spill, we’re still waiting for the oil company to pay. The Gulf’s ecosystems and communities still have a long way to go, and they deserve justice.

pay up you Deadbeats! You make us ill....excuses, excuses. Lies, lies!

Cat Island was once a lush mangrove island. The BP oil spill killed all trees and the island eroded.