Four lessons for water-stressed regions, from the Colorado River

I have just returned from a firsthand, and uplifting, look at the pulse flow now pushing its way through the Colorado River Delta. My boots are barely dry from standing at the leading edge.

For the past 50 years, dams and diversions have prevented the mighty Colorado from reaching its natural destination – the Gulf of California. Without a doubt, the diversions of water have helped improve the quality of life for many people. But they’ve also created hardship for communities that once thrived along the 100 miles of riverbank from Yuma, Ariz., to the sea. The impact on migrating song birds, fish populations and the wooded riverbanks has been profound.

What is pulse flow?

The pulse flow is an experiment to see what will happen if we imitate the natural spring floods that historically sent water rushing down the channel. How will nature - and people - react?

Experts won’t be able to answer that question for some time. However, here is a first impression. Anytime we found the front of the flow, we found people - families playing and marveling at the return of the river. Men were fishing, and even catching fish. Under the bridge in the first major town along the river’s path a brass band was playing well after dark.

Not long after the pulse flow enters a section of the river bed, nature’s first responders follow. Dragon flies show up in surprising numbers. Birds are drawn to the area and announce themselves with loud chatter. It even turned conservation enthusiasts into construction engineers. Informal river crossings had built up over the years and threatened the flow downstream. As conservationists discovered them, they attacked them with everything from backhoes to canoe paddles. 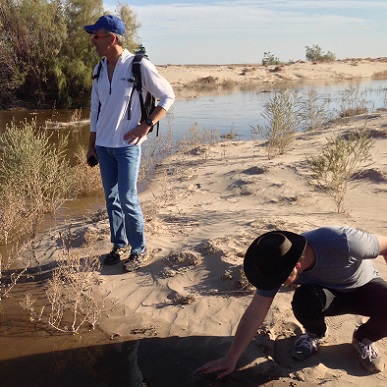 I like the pulse flow because it is a real-world experiment in improving the economic and environmental results from our stewardship of rivers. It is embedded in an agreement called Minute 319, which spells out in great detail how the river is to be shared by the United States and Mexico. It’s the first agreement of its kind that commits water for restoration purposes without harming other water users.

Can the pulse flow be replicated to restore rivers in other water stressed regions around the world? With apologies to the importance of the nuances of international water-sharing agreements, here’s my shorthand of the steps needed to get a pulse flow.

First, find water. Anywhere irrigation is critical to food production, agriculture is responsible for 70% or more of withdrawals from rivers, streams and groundwater. As societies realize the value of conserving water, money can be made available to incentivize farmers and managers of irrigation infrastructure to improve, voluntarily, irrigation efficiency. In other words, with the right incentives, they can maintain or improve their food production using less water.

Second, find a way to buy some of the saved water. Farmers who save water through efficiency can choose what to do with the “saved” water. One choice is to sell or lease it to someone else, using the payments to help defray the cost of improving efficiency.

Third, particularly for rivers where flow is generated by melting mountain snowpack, find a way to mimic a spring flood. Water savings accrue over time so releasing water as efficiency measures are put into place would produce but a trickle at a time. The key is to store enough water to make a difference. In this instance, Minute 319 broke new ground in international water sharing by allowing Mexico to store up water in Lake Mead, a short drive from the famous Bellagio fountains in Las Vegas.

Finally, prepare the way. Starting several years ago, farmers and conservation advocates worked together in the Colorado River Delta to plant and irrigate several hundred acres of restored native habitat. The natural condition for the delta includes periods of drought and periods of floods (natural pulse flows). Therefore, the ecosystem has evolved to take advantage of this kind of wet/dry cycle. The problem is that with only a handful of exceptions, the delta has not been wet through and through since before the early 1960s! Much of the natural vegetation had long since died out.

The hope is that the pulse flow will act like a cardiac defibrillator and shock the system back into its routine, albeit for only a portion of the historic delta. But the restored connection between the Colorado River upstream and the Upper Gulf of California should be a boon to the hundreds of bird species that migrate the Pacific flyway. Of course for this to be truly successful, it will require more pulse flows (scientists think, about one every five years) and a small amount of steady water (called base flow) in between just to keep things damp.

A new foundation for stewardship

Thanks to the painstaking approach taken by the architects of Minute 319, there is a solid foundation for this new approach to stewardship of the Colorado River.

It harnesses the interests of public and private sector entities that have the resources to pay for water that can be used to improve the health of the river, which in addition to farmers and cities, provides water for recreation, fish and wildlife, and creating a more resilient ecosystem.

It avoids the trap of extremes.

With this kind of approach, we just might be able to meet human needs for food, water and infrastructure in ways that allow us to leave the next generation a better, more fun and productive ecosystem.