My climate confession: I was pessimistic until I saw this graph

Recently, I’ve begun to question whether we can solve the climate crisis.

Deep down in my darkest thoughts, from everything I know, have read, and have been told by the scientists at EDF about the growing threat, and from witnessing the unrelenting stream of dopey climate denialism in Washington, I’ve found it increasingly difficult to maintain hope. The fear that we won’t avert climate catastrophe has taken hold. And I shudder at what that will mean.

It’s a terrible and sobering notion, maybe one you’ve shared in recent years.

As a parent of a 9-year old and a 7-year old—two sweet, beautiful children who mean everything to me—I often ask what more can I do? How are we going to fix this problem? And what kind of world am I going to leave to my kids?

Then, about a month ago, in a meeting to discuss EDF’s climate strategy, a colleague of mine presented this graphic: 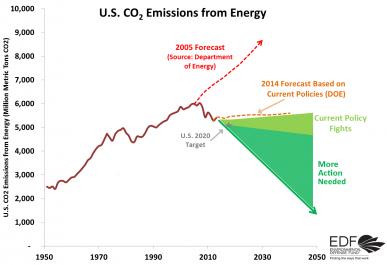 I had an instant reaction. This chart tells a powerful story. Over the last few years, our work really has made a difference. We have reduced America’s carbon emissions. We have altered the course of history.

For the first time in a long time I began again to feel a sense of hope…to see a path forward.

This is a serious moment. The fight to avoid climate calamity confronts us with sobering realities. While we have made progress, we have a tremendous amount of work to do. And very little time in which to do it.

This year, that starts with mounting an all-out defense of the Environmental Protection Agency’s plans to establish the first national carbon pollution limits on American power plants, the largest source of carbon pollution in the U.S.

Most Americans are outraged to learn that there are currently no national climate pollution limits on fossil-fuel-fired power plants. None.

If we have any hope of averting climate catastrophe, that has to change. And that starts with all of us who care about protecting nature and fighting for a safer climate future speaking out to support the strongest possible power plant rules.

Then, we must stand together against the dirty energy lobby and defend the EPA from reactionaries in Congress who still deny the reality of climate change. Nothing is more important.

There is still hope, but we must engage and work constructively with our members and partners on these important solutions. With determination and resolve, if we stand together, we can still solve the climate crisis.