By Jennifer Pitt
Jennifer Pitt, based in Boulder, CO, is the Colorado River program director at Environmental Defense Fund.
Published March 27, 2014 in Ecosystems

Yesterday, I paddled down a brand new river.  The Colorado River is running swiftly in its delta, where it hasn’t flowed for much of the past half century.  A growing population, extended drought, and tremendous institutional inertia have all contributed to the demise of what was once known as a landscape of a thousand green lagoons.

For the past two decades, I have worked with a small team of conservation NGOs from the U.S. and Mexico that, together, made this possible. It was thrilling to finally see the fruits of our labor.

As my canoe floated downstream, I couldn’t help but notice the birds: crissal thrashers, Virginia rails, coots and mallards, even an osprey. I saw cottonwood seeds floating down from the trees. I heard bullfrogs. I saw beaver. 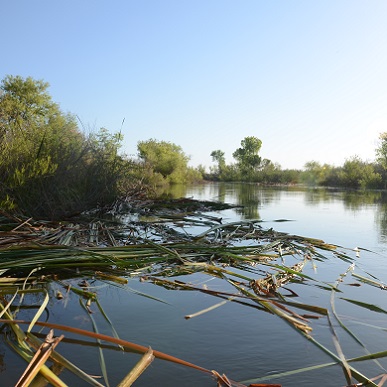 Two days earlier, on March 23, 2014, the gates were opened at Morelos Dam, the last dam on the river, shortly after 8 am. The river started its journey downstream to the Gulf of California. The channel meanders over 100 miles, of which 25 are bone dry sand. I stood next to my colleagues on the banks below, watching in awe as the river that we have known as “dead” began to live again. This small miracle is the result of new cooperation between the United States and Mexico, part of a treaty that benefits Colorado River water users in both countries. It includes new rules for reducing water uses in times of drought and sharing surpluses in times of plenty, binational water conservation projects, and incentives to save water and store it in the Colorado’s reservoirs.

The pulse flow is ephemeral by design, lasting only 8 weeks. The volume of water was negotiated between the countries; then scientists advised how to use it to greatest ecological effect, planning for it to create and rejuvenate forest habitat on the banks. 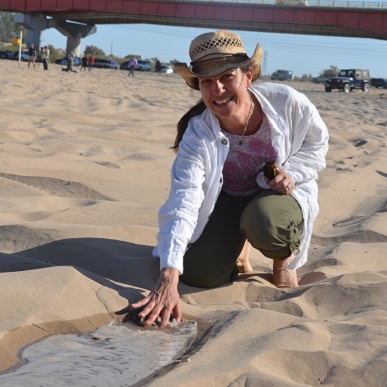 One of the most fascinating aspects is watching the river’s leading edge as it moves downstream across the sand. There’s a lot of sand. So much sand that some wonder if the pulse flow will make it all the way to the sea. After our paddle we headed south to the city of San Luis Rio Colorado where a large bridge straddles the channel, and found the water creeping forward. The flow moved in tendrils, pooled in depressions, then ran forward again. At times it seemed to stop, and then shoot forward again. Flow river flow!

Parents brought their children, a generation that has never known the river.

By late afternoon, the river had arrived. Locals from San Luis Rio Colorado had been waiting for it, and as the water’s extent grew visibly, more and more people started coming down to see it. The folding chairs came out, and the picnics. At one point a brass band played. Parents brought their children, a generation that has never known the river after which their community is named. The gravitational pull of the water was strong, and it was hard not to immerse some part of yourself in it. 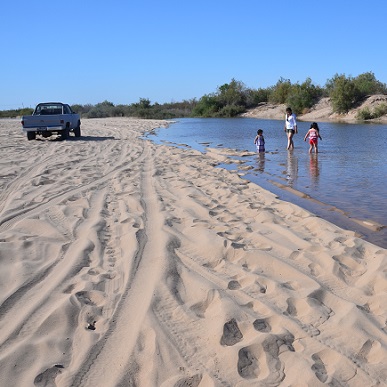 I’ve spent the majority of my professional life on making this river flow again, and with my colleagues we have developed scores of reports that define the ecological benefits of a restored Colorado River Delta. Back in 2005, we even published a book synthesizing information on conservation priorities based on a thorough assessment of species and habitats.

The Colorado River in its delta has value for the forest and value for the wildlife. But what I saw in San Luis Rio Colorado demonstrated that there’s value for people too. Flow river flow!

Great miracle and pretty interesting for the delta let's see how is gulf of California involved for good things.

I will have to attend to see this first hand, impressive. I worked the canal systems around Palm Springs, Mexicali, Calexico, Imperial, over to Yuma. Furthest south water was American Canal on the border. Congrats, well done. When is the next release ?????????????