By Andy Darrell
Andy is Chief of Strategy for EDF's Global Energy and Finance program.
Published June 20, 2013 in Climate 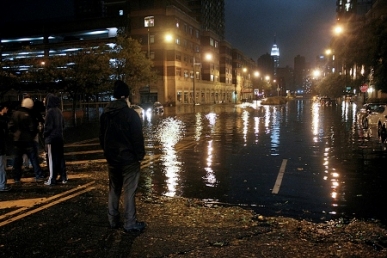 Last Tuesday, I caught a ferry from the lower Manhattan waterfront (just south of the substation that shorted out so dramatically in the midst of Hurricane Sandy) to the Brooklyn Navy Yard. There, Mayor Michael Bloomberg unveiled his vision of a New York that will be far better able to withstand the battering from giant storms that, thanks to climate change, are likely to arrive with increased frequency and fury.

The Mayor began by noting some stark facts:

A lot of media attention in the wake of the speech focused on Bloomberg’s call for levees and seawalls to keep rising waters at bay. But embedded in the address was also an ambitious but practical rethinking of how New York City makes and uses energy. The plan frames a future in which solar, wind and microgrids play a much larger role in the city:

“Our plan calls for utilities and regulators to diversify the sources of energy feeding the city, to fix rules that hinder the growth of distributed generation, including for customers who want to generate their own power and to work with the City to evaluate and adopt micro-grid pilots.”

Together, a network of cleaner energy sources – including solar and combined heat and power, which are proving successful in many places already – can offer both less pollution in good times and a source of power if the grid goes down. The key is to set up the rules of the grid so that homes and businesses can choose to build these renewable and resilient systems into their buildings as a matter of routine.

Getting the rules right will require cooperation at many levels. New York City’s energy future is largely in the hands of regulators and companies not directly under the control of city government. As a result, change on the scale proposed by the Mayor will take unprecedented collaboration among government agencies and between government and utilities, leaders in finance, real estate and local communities.

The challenge now is making these visions a reality. Many of the rules we need changed are set by the New York State Public Service Commission.  The city will need new rules governing the grid to allow for easy integration of renewable energy sources, using ideas like demand-response to make sure we take full advantage of sunny and windy days.

We will also need to scale up ideas, like on-bill repayment, to attract private capital to the task of retro-fitting buildings so that they can use cleaner power sources. And we need to make these solutions work for a city with buildings and neighborhoods as diverse as Wall Street, Red Hook, the Rockaways, Harlem, the South Bronx and Staten Island.

Overall, it’s encouraging to me to see city (and state) leaders stepping forward with visions that point toward a future in which New York will help keep its  lights on in a storm and cut the emissions that are linked to climate change in the first place.

The stakes are high. Check out these facts:

Let’s get to work.

All plans should be made a reality, not just doing by saying it but doing by actually DOING it.

I have read your article in forbes.com before and hope these thing actually get materialised soon.

All plans should be made a reality,

ast Tuesday, I caught a ferry from the lower Manhattan waterfront (just south of the substation that shorted out so dramatically in the midst of Hurricane Sandy) to the Brooklyn Navy Yard. There, Mayor Michael Bloomberg unveiled his vision of a New York that will be far better able to withstand the battering from giant storms that, thanks to climate change, are likely to arrive with increased frequency and fury.

we should be aware that environmental awareness is very important, it is in its current state we need to work together to create new ideas to conserve the environment do not just rely on government alone ... because disasters caused by man himself. http://wiramesinjahit.blogspot.com

This article caught my attention. I was really nice reading your post and I definitely agree ayuob.

I am no environmentalist but reading this makes me wonder and think about thousands of "what could have been if..." Keep it up .. so steering

i have never been to newyork. but visited england last year. is there any ame regulation deal with this issues?