By Rod FujitaFollow
Rod is the Director of Research and Development for EDF's Oceans program.
Published May 14, 2013 in OceansPartnerships 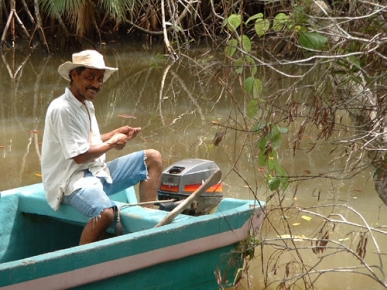 Recently, I listened to yet another lecture about the poor performance of many top-down development projects in post-earthquake Haiti.  And it’s not just in Haiti that large, centrally planned projects have failed. The history of development aid is rife with examples. There are oil pipelines built to generate public wealth but shanghaied by corrupt leaders to purchase weapons; fish processing plants built in deserts inhabited by nomads with no history of eating fish; countless misguided dam projects that displace millions of people.

Why does foreign aid often fail?

Big international projects are often not connected to the skills, aspirations, and cultures of the people they aim to help. Rather than empower people to help themselves, they attempt, often unsuccessfully, to impose solutions from the outside.

Fortunately, development institutions are learning from these mistakes. In trying to help Belize improve their fisheries and – simultaneously - the conservation of the country’s incredible barrier reef and associated complex of nearshore habitats, EDF has tried to apply lessons learned from Big Development to take a much different approach.

Starting with the locals

EDF staff spent a long time listening to Belizean fishermen, government officials, and local NGOs to learn the lay of the land – how things worked there. We hired talented local staff. We identified strengths – including a strong ocean conservation ethic inculcated in young children, well-trained government staff, and highly competent NGOs that co-manage natural resources with the government – as well as weaknesses.

Dozens of meetings and workshops held over several years allowed Belizeans to articulate their needs and aspirations with respect to fisheries and the future of their coral reef.

As a result, Belize is poised to transform its fisheries and improve the performance of its marine protected areas and conservation programs.A national system of managed access areas will empower local fishermen as stewards of their own fisheries, by allowing them to exclusively benefit from the buildup of fish inside the no-take zones adjacent to them.

Science-based catch limits are under development now, combining local data and local knowledge with some outside expertise in data analysis and modeling. In contrast to the usual chilly reception to new management systems, Belizean fishermen are demanding managed access and some even are demanding larger no-take zones – a testament to the power of developing solutions from the ground up, and supporting them from the top down.