Executive Action Critical, but not Enough to Fight Global Warming

By Keith GabyFollow
Keith is an Associate Vice President of communications at EDF.
Published March 28, 2013 in ClimatePolitics 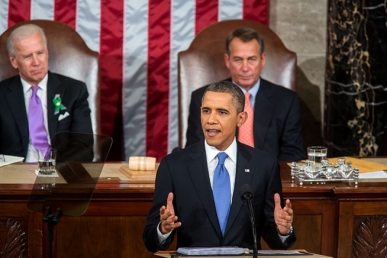 The politics of climate change is an issue The Nation has covered extensively, and I think many of our readers would wonder why Mr. Gaby, in asserting that Congressional legislation is the only means of taking serious federal action against climate change, ignores the argument (put forth by the Center for Biological Diversity, among others) that President Obama and his EPA Administrator already have the authority under the Clean Air Act to order dramatic reductions in U.S. greenhouse gas emissions.

Congress is one way; it is hardly the only way. And since Congress is now blocked by right-wing intransigence, and since the hour (as Mr. Gaby notes) is already very late, surely it behooves us to deploy a readier tool, no?  —  Mark Hertsgaard, environment correspondent for The Nation magazine and  author of numerous books about climate change, including HOT:  Living Through the Next Fifty Years on Earth. Mr. Hertsgaard is alsoa Fellow of the New America Foundation.

Because Congress failed to pass comprehensive climate legislation in 2010, and prospects for action in the current Congress are remote, many environmentalists have been focused on steps President Obama can take on his own. And it is true that the President has authority under the Clean Air Act to take significant action to limit greenhouse gas emissions. But while these steps are both necessary and critically important, they do not let Congress off the hook in the long run.

The World Resources Institute recently studied the impact of actions the EPA could take under existing law. In Goldilocks style, they laid out three scenarios – lackluster, middle-of-the-road, and go-getter – based on the aggressiveness of EPA’s approach. Unlike the home-invading blonde of the fairy tale, WRI recommends the most aggressive approach, which would reduce emissions 17% below 2005 levels by 2020. That’s the same level of reductions that would have been achieved by the failed congressional legislation. What’s more, this path would result in a 40% reduction in pollution by 2050.

So what’s the problem?  Well, a 40% reduction is only half of what we need to achieve to avert the worst impacts. In other words, we can’t get to a safe climate from here without action by Congress, even under the most aggressive scenario of executive action. As WRI says, “New federal legislation will eventually be needed, because even go-getter action by federal and state governments will probably fail to achieve the more than 80 percent GHG emissions reductions necessary to fend off the most deleterious impacts of climate change.”

Without that level of commitment, we also won’t see other countries achieve the reductions necessary. While about one-third of the world’s economic output is technically covered by some form of greenhouse gas emissions limit, these rules are far from enough to solve the problem. And while growth-hungry nations in Asia are starting to take steps on climate change, they will likely insist on bold action by the United States before moving as aggressively as is necessary.

The most important short term domestic priority for environmentalists should be ensuring that EPA carries out its obligations under the Clean Air Act*. That would cut billions of tons of pollution and buy us critical time in the fight against climate change. But if we are to prevent the worst impacts of artificially altering the Earth’s natural systems, we need Congress to eventually accept its responsibility to protect the nation.

All science has to do is say in one strong voice that a climate crisis is as sure and ad eventual as a comet hit is.
Science can say a comet hit is real but science can’t say a climate change crisis is as real as a comet hit; only "could be" and "might be" and it's been 27 years of studying mostly effects not causes of an assumed to be real crisis. Not ONE single IPCC warning isn't swimming "maybes". Help my house could be on fire maybe? REAL planet lovers are happy not disappointed a climate crisis was an exaggeration.
Former Climate Change Believers are Better Planet Lovers

World War two ended less than 4 years after Executive action was initiated by then President Roosevelt.

We need to replace the fossil fuel power plants, the primary source of GHG. Now!

At a scale required to accomplish this task :

Wind is Intermittent : Not a viable option

All Human and Agricultural Organic Waste can be converted to hydrogen, through exposure intense radiation!

The Radioactive Materials exist now, and the Organic waste is renewable daily.

Ending the practice of dumping sewage into our water sources.

A work mate linked me to your resource. Thnx for the information.

I'm really impressed with your writing skills as well as with the layout on your weblog. Is this a paid theme or did you customize it yourself? Anyway keep up the excellent quality writing, it is rare to see a nice blog like this one these days.