What Happens in Cuba Doesn't Stay in Cuba

By Daniel WhittleFollow
Daniel is the Senior Director of EDF's Cuba Program, and focuses on advancing conservation of marine and coastal ecosystems in the Caribbean island nation.
Published March 14, 2013 in OceansPartnerships 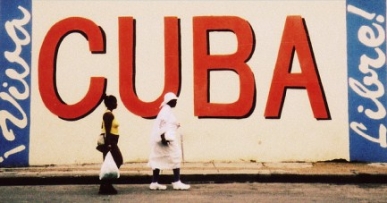 Recently, the PBS show Nature rebroadcast “Cuba: An Accidental Eden,” a documentary first shown in September 2010. The program provided beautiful images of the island’s largely unspoiled natural environment, as well as interviews with Cuban scientists and environmentalists, who speak proudly of preserving their country’s wildlife and rich biodiversity.

I remember watching the documentary when it first aired, with a group of Cuban marine biologists, fishery scientists and park rangers in a hotel bar in Sarasota, Fla. They had come to a workshop to share research with Mexican and American colleagues and to discuss how we could collaborate to protect marine ecosystems in the Gulf of Mexico and western Caribbean.

As a Cuban scientist said after the documentary ended, “We may be separated by a wide political gulf, but the Gulf of Mexico brings us close together.”

Truer words could not be spoken. Because of the prevailing currents and Cuba’s proximity to the United States, marine and terrestrial ecosystems in the two countries are tightly linked in ways that no political disagreements can affect.

Cuban coastal waters are the spawning grounds for snapper, grouper and other reef fish that are crucial to commercial and recreational fisheries in Florida.  Migratory sharks swim freely across the Gulf’s political boundaries, and American scientists have recently discovered a vast deep water coral ecosystem that may extend from North Carolina to the north coast of Cuba.  Also, the area around Havana is a major wintering ground for most of the familiar songbirds that nest along the eastern seaboard of the United States.

Lastly, Cuban waters off the Gulf of Mexico hold vast oil reserves, and if a major oil spill were ever to occur, currents in the Florida Straits would almost certainly carry oil to American waters and shorelines.

Which brings us back to the bar in Sarasota…

In recent years, the Cuban and U.S. governments have taken important steps to facilitate scientific exchanges and environmental dialogue. That workshop in 2010 is one example – an event made possible only because the U.S. State Department granted travel visas to 20 Cuban experts, none of whom had been here for years.

Since then, collaborations between Cuban and American scientists have grown and important joint research is underway on issues ranging from protecting endangered manatees, sea turtles and other endangered species, to preserving coral reefs through an international network of marine parks. The two governments are also talking about the best way to prevent another oil spill in the Gulf.

Environmental protection is no accident. It requires good science, careful planning, and strong political will. In the case the U.S. and Cuba, it starts with cooperation.

Great article, Dan. Marine science is one of the only avenues available for real collaboration between our countries and we have definitely made the most of it.